Each year AIHP publishes a Pharmaco-Historical Calendar featuring images related to the history of pharmacy. AIHP members receive the annual calendar as a benefit of membership, and the calendar usually ships in November or December so that members will have the calendar in time for the start of the new year.

Extra copies of the current year’s calendar may be ordered for $6.00 ($4.00 for members). A small numbers of calendars from previous year may also be available for purchase.

Please contact us at aihp@aihp.org to inquire about ordering calendars. Due to the current covid restrictions, fulfillment of calendar orders may be delayed. 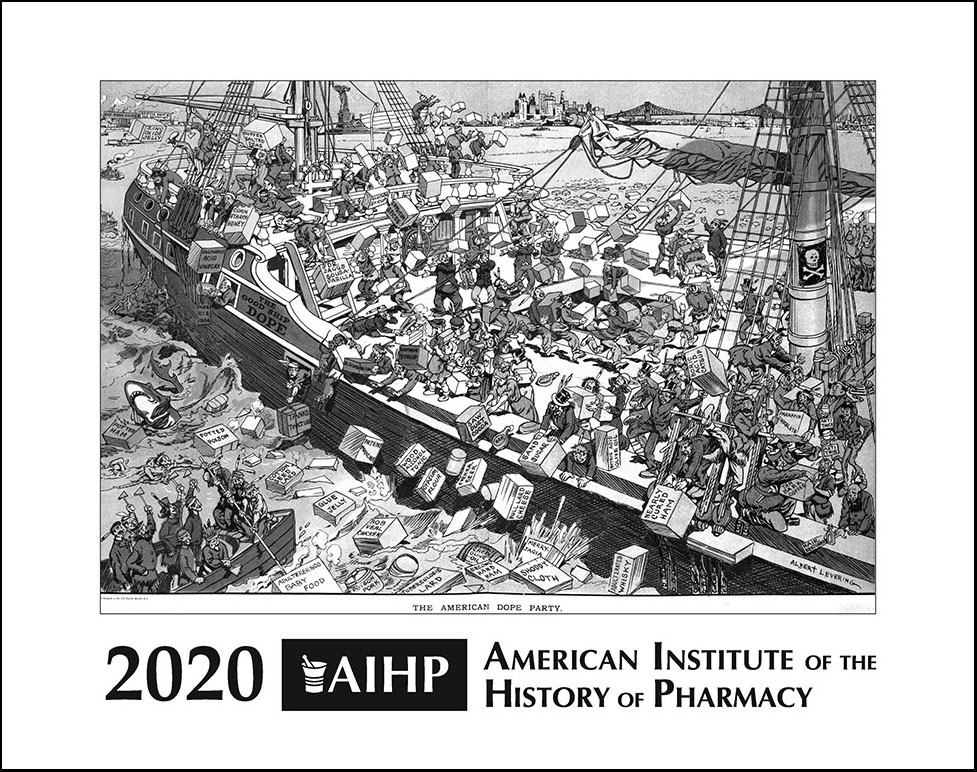 The 2020 AIHP Pharmaco-Historical Calendar: The cover features the cartoon, “American Dope Party: A Lesson in Practical Patriotism Taught by the Boston Tea Party,” from the satirical magazine Puck in 1906. 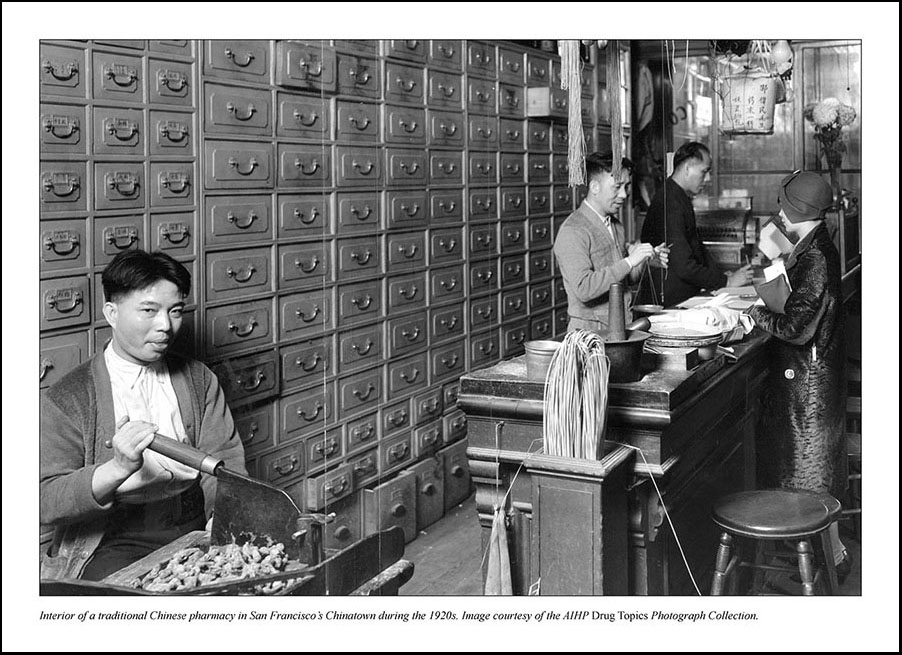 The image for January 2020: Interior of a traditional Chinese pharmacy in San Francisco’s Chinatown during the 1920s. 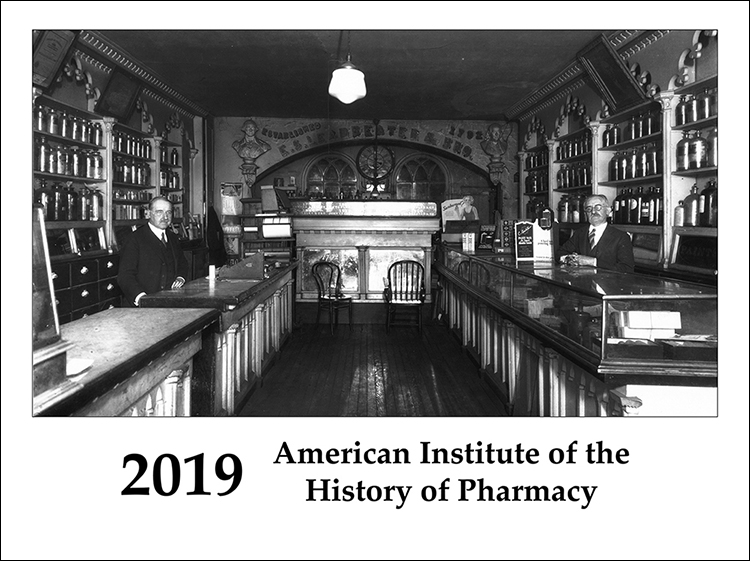 The 2019 AIHP Pharmaco-Historical Calendar: The cover features a 1928 image of the historic Stabler-Leadbeater Apothecary, which served customers in in Alexandria, Virginia, from 1792-1933. 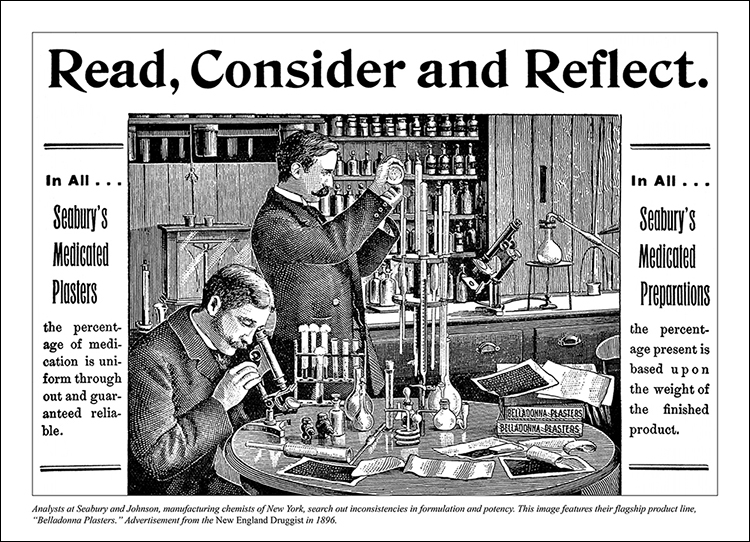 The image for November 2019: Analysts at Seabury and Johnson, manufacturing chemists of New York, search out inconsistencies in formulation and potency. This image features their flagship product line “Belladonna Plasters.” Advertisement from the New England Druggist in 1896. 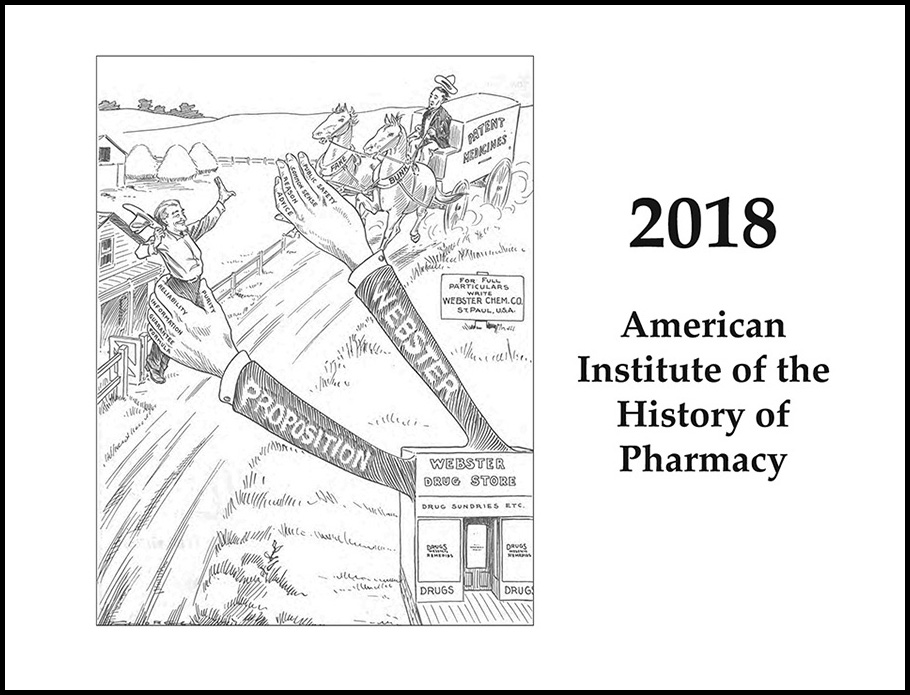 The 2018 AIHP Pharmaco-Historical Calendar. The cover image features an advertisement for the Webster Proposition from the Webster Chemical Company of St. Paul, Minnesota. The Webster proposition promised to combat “fake” and “bunk” patent medicines. 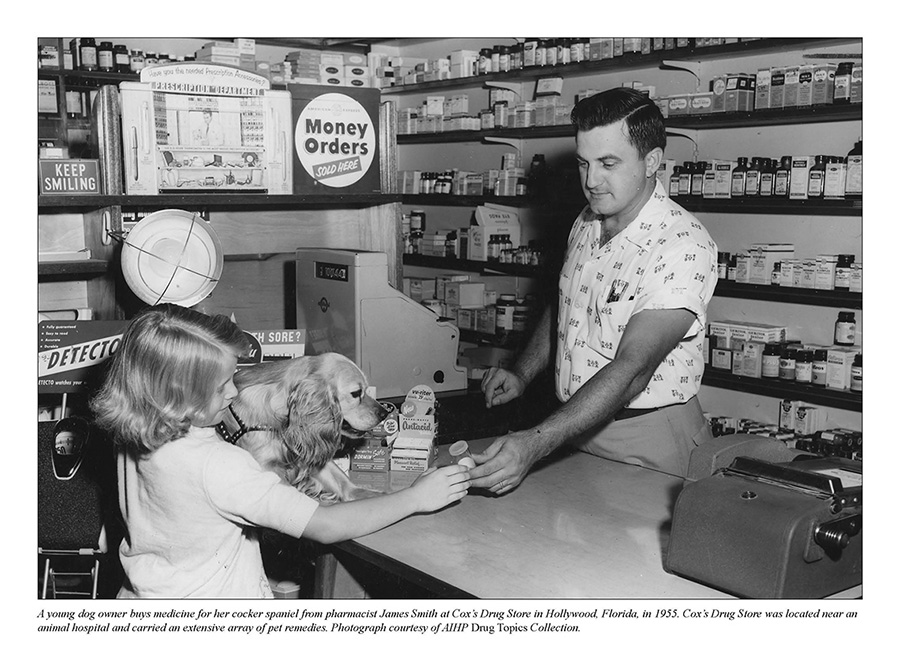 A young dog owner buys medicine for her cocker spaniel from pharmacist James Smith at Cox’s Drug Store in Hollywood, Florida, in 1955. Cox’s Drug Store was located near an animal hospital and carried an extensive array of pet remedies. Photograph courtesy of AIHP Drug Topics Collection

The 2017 AIHP Pharmaco-Historical Calendar. The cover image features a pharmacist (c. 1920) at People’s Drug Store No. 5 in Washington, D.C. examining a prescription before commencing his compounding. Photograph courtesy of the Library of Congress Prints and Photographs Division (LC-USZ62-129891). Sample Image from the 2017 AIHP Pharmaco-Historical Calendar: The month of February 2017 depicts an image of the interior of the James and Allen Drug Company of Chattanooga, Tennessee, a black-owned pharmacy that was featured in the book, Progress of a Race in 1902. The 2016 AIHP Pharmaco-Historical Calendar. In honor of AIHP’s 75th anniversary, the cover image shows the 1966 installation of an historical marker at the University of Wisconsin School of Pharmacy commemorating the founding of the AIHP on January 22, 1941. Pictured (left to right) are Ernst Stieb, Glenn Sonnedecker, Arthur Uhl, and Louis Busse holding the bronze marker in front of a portrait of George Urdang by Robert Thom. Sample Image from the 2016 AIHP Pharmaco-Historical Calendar: The month of March 2016 depicts an image of pharmacist Richard Nomura chatting with patient Yoshie Shintani at the Minidoka Relocation center, near Eden, Idaho in 1942. Photograph courtesy of the National Archives. The 2015 AIHP Pharmaco-Historical Calendar featured illustrations of women in pharmacy. The front cover includes photographs of the Women in Pharmacy Conference Room at the American Pharmacists Association headquarters; the Grand Council of Kappa Epsilon in 1965; and the 1900 graduating class at the University Wisconsin School of Pharmacy with Caroline C. Thomas in the back row. The publication was supported in part by the AIHP Women in Pharmacy Fund. Sample Image from the 2016 AIHP Pharmaco-Historical Calendar: The month of March 2015 depicts a Smith, Kline & French filling line in Philadelphia with several female workers. During the early days of the American pharmaceutical industry, women commonly worked in the finishing and packaging departments.