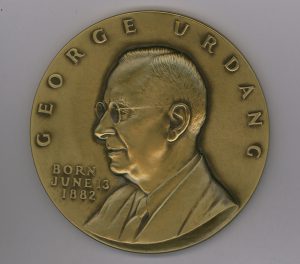 AIHP is now accepting nominations for the Urdang Medal and the Kremers Award, two of the most prestigious awards for scholarly work in the history of pharmacy. The deadline for receipt of nominations is April 30, 2019.

The George Urdang Medal is awarded for an original and scholarly publication, or series of publications, pertaining primarily to historical or historico-social aspects of pharmacy. The Medal may also be awarded for popular works intended to achieve more widespread appreciation for, and better understanding of, pharmacy and its past among members of the pharmaceutical profession, allied professions, or the public.
The Urdang Medal is awarded without restriction as to citizenship of the author or place of publication. Evaluation is based on competence of research and skill of interpretation and presentation. The nominee’s age, total number of publications or previous honors is not given primary consideration.

Nominations are evaluated by a committee consisting of three members of AIHP’s Committee on Awards and three historians of pharmacy from countries other than the United States. If awarded, the 2019 Urdang Medal will be presented at the 44th International Congress for the History of Pharmacy, which will be held in Washington, DC in early September 2019.

The Urdang Medal was established in 1952 in honor of Professor George Urdang, one of AIHP’s founders and a renowned scholar of the history of pharmacy.

Download a Nomination Form (.pdf) for the George Urdang Medal.

Download a Nomination Form (.pdf) for the Edward Kremers Award.

The deadline for submitting nominations for either award is April 30, 2019. Complete nominations forms should be emailed to aihp@aihp.org or mailed to AIHP’s office in Madison.